What are .hex files?

You must have come across .hex files by now. Every time you compile a program on the micro:bit website you end up with one. You copy it to your device and the program runs. Every time we post a project on this blog we include a .hex file. Every time you hit the Flash button in Mu it silently and secretly creates a hex files and automatically copies it to your micro:bit. But what are .hex files, how do they work and why should we care about them? 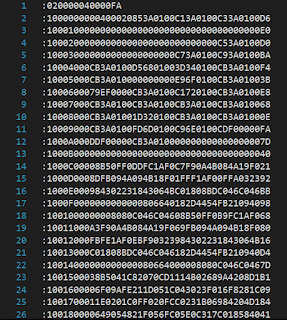 The micro:bit's .hex format is actually not all that special, in fact the format was created by Intel way back in 1988. Intel set out to define a simple format that they could use to load binary programs and data into their processors. They wanted it to be ASCII (human readable) rather than the hard-to-read binary that computers needed so they devised a simple way to encode the binary data as ASCII characters. They also defined the format to be able to specify where in the target device's memory the data should be stored and where the device should start executing the code from. Because the format was so simple it was easy for them to write code for their processors that would load and run one of these files. The format soon became a favourite and is now supported for everything from microprocessors to EPROM programmers to.. your micro:bit.

How Does It Work?

The format is straightforward, a sample line looks like this:
Every character of the line (apart from the very first colon) represent one hexadecimal digit. Two hexadecimal digits make a single byte of data. Each line of the file follows the exact same format:
We won't go into more detail than this here - if you want to know more then take at look at the Wikipedia entry or, if you're having trouble sleeping, dive into Intel's original specification document.

Let's write a simple Python script and compile it into a hex file. Here's the script:

The raw .hex file is not very exciting or readable, so here's an annotated version which shows what each line means:
simple_script_1.dump

Although there are lots of possible record types in the HEX format you'll only see four types used here:
Take a look through the file and you'll see lots of unreadable junk in there (this is generally the actual machine code that the processor runs) as well as some readable text. The majority of the file is the Phython interpreter. If you look closely you'll see all the function and modules names, help text and error messages in there. But then.. right at the very bottom of the file you'll see what looks like the text for our script, and that's exactly what it is!

Now, what happens if we write a different script?

Notice anything interesting in the dump file? Well, almost all of the file is exactly the same. In fact there are only a few lines of difference and those few lines are the ones that we already identified as containing the data for our script.

Here's the end of the first script:
And here's the second:

From this we can infer that the .hex for a micro:bit MicroPython script looks roughly like this:
..and the only part that differs is part 3. What would happen if we copied parts 1, 2, 4 and 5 from a healthy donor .hex file and injected our own part 3? First we need to understand part 3 a little more.

How Does Our Script Become Hex?

Take a look at the part of the .hex file that contains our script:
You can see that ahead of the script text are four mysterious looking bytes. What are they? Actually they're not all that scary. The first two bytes are the signature "MP" which, presumably, means MicroPython. The next two bytes turn out to be the length of the script that follows. These four bytes are checked by MicroPython when it compiles the script on the micro:bit and they must be exactly right. At the end of the script section you can also see that the data is padded with zeros. This probably isn't necessary - it's likely that only the first zero is actually needed.

Now we know that to make our own part 3 we only need to prefix the script with "MP" and the two length bytes and zero terminate the script text.

So, Can We Make .hex Files Ourselves?

Now that we understand all parts of the .hex file it's pretty easy for us to create them ourselves. Copying parts from donor file is straightforward but it still might seem a little daunting to actually synthesise our own part 4 - we will need to fill in the record types, calculate checksums etc. for each line. But don't worry, because we've written a simple Python script to automate the process.

Because we'll be using Python on our Windows/Mac/Linux/Whatever computer we'll need to download and install it first. We'll be using Python 2.7, so head over to https://www.python.org/downloads/ and click on "Download Python 2.7.12". The last digit "12" may change over time as they release updates, but it's correct at the time of writing.

Once you have Python installed you'll need to download the following two files into a new directory somewhere on your computer:
make_hex.py
python_base.hex < This is the "donor" file containing the MicroPython code

Then create a Python script file in the same directory (call it "test.py") and paste the following code in it:

You should see the yellow light flash for a short time and then the script should run and scroll the text message across the display.

In this post we learned what the .hex format is, where it came from and a little bit about how it works internally. We also learned how MicroPython uses .hex files. Armed with this knowledge we figured out how to create our own .hex files from raw Python scripts.

Use this knowledge how you want. From now on we will probably be editing our code in a standard text editor and then creating and copying the .hex file to our micro:bit using our new tool. Up until now we've been using Mu. We do like Mu, and it's editor is pretty nice, but it's not a patch on other, more fully featured code editors.