Son and I recently went off for a boy's weekend at the Grandparents. We knew that we'd be stuck on trains for a good few hours so we decided to take along the micro:bit so that we could embark upon our own Train Jam. Son chose to work on a maze game where you have to navigate your way to the exit. He also wanted keys and doors to make it more of a challenge. 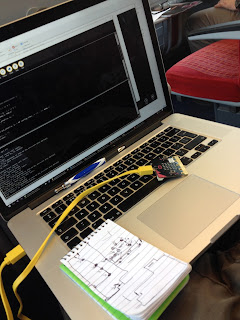 We thought it might be tough to make this a fun game on such a limited device so we decided to keep things simple. With only 25 red LEDs it was tough to think how we could show the various elements of the maze. We decided that:
Before we started on the actual game we knew that the movement mechanism would be important so to begin with we decided to prototype a couple of different control methods. We put a pixel in the middle of the LED display and tried different ways to move it around:
It's super important to prototype things wherever you can before starting on a big project. If we'd gone with our first method we might have been dissatisfied with the gameplay and not got around to finishing the project. To take it to an even further extreme - if we hadn't been able to make a satisfactory movement mechanic at all then there would have been little point in trying to build a fun game around it.

The code is probably the most complex thing we've written so far. Here it is  in full:


There's one interesting thing about this project - we started to hit the limits of the micro:bit memory. We will expand on what this means (and how to scrounge more memory!) in a future post but suffice it to say that, for now, we worked our way around the limits. Probably the most interesting technique we used to save memory is the one that deals with changes to the map. The map is represented as an array of letters (which we call map blocks), so 'w' represents a wall block, 'k' is a key, ' ' is for a space that we can walk on etc.. When the player picks up a key we ned to erase it from the map. Python is great at this and we could have simply made a new copy of the map with the key removed, then swap the maps over. This would work, but requires (at least) twice as much memory - that's too much. The solution is quite neat - we never remove blocks from the map, meaning that we never need to copy the map! Instead we maintain a list (called map_blocks_cleared) of all the blocks that we've "erased". Whenever we try to read from the array of map blocks we first look in this list and if the block we're looking for is in there then we return ' ' instead of what's really there. We wrap all of this functionality up in get_map_block() so that's very easy to query map blocks.

Don't forget that you can just copy the hex file to your device to run it. To play the game tilt the micro:bit in the direction you wish to move and press A. You're looking for the exit (a crazy flashing/strobing pixels) and you'll need to collect keys (rapidly flashing pixels) to open doors (slowly flashing pixels).

Once you've completed the game, how about looking at the source code and figuring out how to make your own maze? Please share your creations in the comments if you do!
Posted by Giggletronics at 13:10