Begin at the Beginning 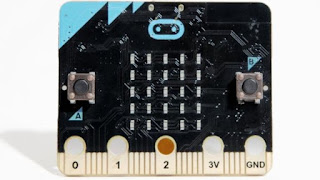 I can't remember when we first heard about the BBC miro:bit, but it filled us both with excitement. I'm a software engineer who also dabbles in electronics, and Son is a school kid who likes to program in Scratch and who is also becoming interested in electronics. I wanted an to find an interesting platform that we could both to learn together. My wish list was something like:

As you can see, the BBC micro:bit fits my list pretty sweetly. The only challenge for us then was how to get hold of one. They were being given out free to all year 7 UK school kids - but Son was too young for that. No-one that we asked could tell us when they were going to be available for the general public to buy. Maybe we should look at something else? Then we were lucky enough to get a hands-on demo at a Microsoft-led workshop at the brilliant Butlins Astonishing Family Science Weekend earlier in the year. We fell for the micro:bit all over again, and then suddenly it seemed like July was all but confirmed as the official release date. All we had to do now was to wait..