Here's our second game, a version of the classic snake game. A bit of a challenge to fit this onto a 5x5 display with only two buttons but we think we've managed it. Drive the snake around the screen using the A and B buttons to turn left and right. The aim is to eat the food (the flashing pixel) but your snake gets longer each time it eats something. Eventually your snake tail will be so long that you'll crash into it and it's game over! 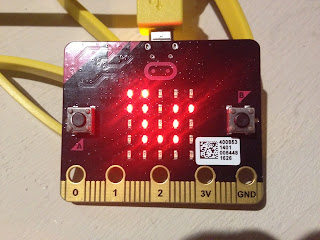 The code uses a list to store the snakes body. Each element in the list is itself a two element list with two entries: X and Y. Each update we draw the player's current position to the screen, push it to the front of the list and then pop the last position off and clear it. This makes it looks like the snake is slithering across the screen. The list starts out at one element long and each time we eat some food we push another, extra element to it - making the snake's body a little longer.

We use another list of X/Y pairs, called directions, to tell us how to move from the current position to the next, based on player_direction. The variable player_direction is an index into that list, which is four elements long, so player_direction must be an integer between 0 and 3. We manage this using the modulus (written as '%') operator:


Here is the complete listing:

Note that it's not possible to complete the game - if you're good enough then you'll eventually run out of space, there will be nowhere to generate new food and the game will hang. Maybe you'd like to add the code to handle this case yourself? You'll need to ask yourself some questions:
Here's the code (and the hex file) if you'd like to tinker:
snake.py
snake.hex